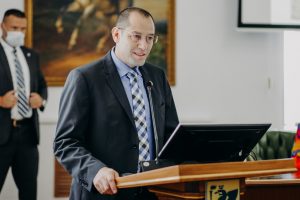 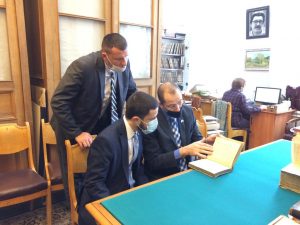 The guest arrived on 11 October.

Mr. Krausz and his colleague, First Secretary of the Embassy Rami Teplitsky, were accompanied by Counsellor to the Rector for International Cooperation Linar Latypov. They toured the History Museum and the Lobachevsky Library of KFU, as well as met with students of the Institute of International Relations. Minister Krausz then presented his lecture ‘Russia – Israel: 30 years of the reestablishment of diplomatic relations’, and First Secretary Teplitsky shared his views in a lecture about social diplomacy.

In particular, Ronen Krausz spoke about KFU’s planned Center for Judaic Studies; the Embassy of Israel intends to assist in its opening and functioning.

“Israel is a young country, and we don’t have university with such a history as yours,” said he. “I am amazed that you preserved the study room where Vladimir Lenin and Leo Tolstoy used to sit.”

At the Lobachevsky Library, Head of the Section of Manuscripts and Rare Books Elmira Amerkhanova showed the guests some of the library’s treasured possessions, “We have a unique copy of Torah from mid-17th century in its original case. We also showed about a dozen other storage units – a couple of Kabbalah books, Rabbinic analyses of the scripture, and others. I hope it was something new for the guests.”